We Are a Community First

What are we about?

In June 2016, Groundswell was founded by three serial entrepreneurs and Space Coast natives, eager to see greater startup activity in the area.

For a little over a year, we brought together technologists, entrepreneurs and innovators at any coffee shop, restaurant or office space that would let us borrow a table.

Today - Groundswell lives in a skatepark-turned-coworking-space, hosting more than 30 events per year and continuing our mission of building a place where Space Coast innovators an build, grow and thrive. 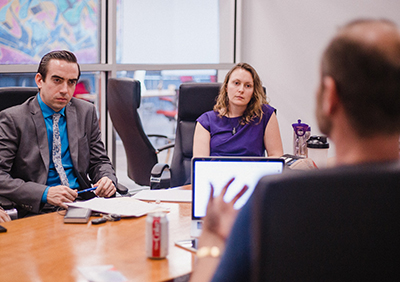 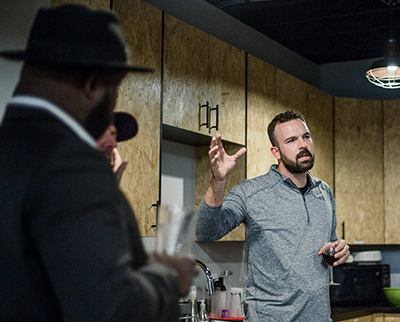 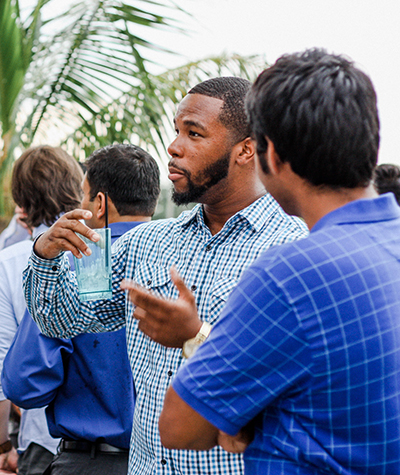 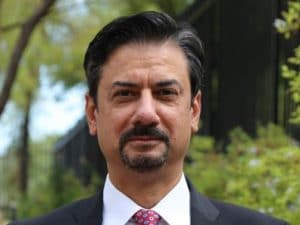 Mamoon Rashid is an accomplished global executive with over 30 years’ experience creating enterprise value within the semiconductor industry. He is known for leading business turnarounds, growth strategies and M&A initiatives worldwide.

Some of his accomplishments include transforming several underperforming technology businesses into highly successful growth engines. He led a Japanese technology company to profitability. His success can be attributed to consistently building collaborative relationships with internal & external partners.

He is comfortable in diverse national cultures having lived and worked in Japan and Europe, as well as conducting business in China and SE Asia for more than 30 years.

Keith is a ‘rocket scientist’ and a dreamer on a coffee-fueled mission to get stuff done. He is passionate about creating value as a business leader, as a mentor, and in the community. Career highlights include roles in R&D Management, Innovation Leadership, Strategy and building awesome stuff for sea, air, space, terrestrial, and subterranean applications.

Alex is an expert in digital media. Alex has served previously as the Chief Digital Strategist of TedX at Ted conferences, a Vice President of Product at AOL and the CEO of Emurse.com, a job hunting website acquired by AOL. He is currently on the Executive Committee for the United Way in Brevard County Florida and an occasional speaker/advisor in the local technology startup community.

A growth marketing expert and certified space-nerd, Aaron is a recent Space Coast transplant passionate about rapid experimentation and product-market fit. Aaron has been on the ground at every level of the growth marketing process and, started, Cohoot, where he leads and manages a community for salespeople and marketers to share information and collaborate.

Originally from Texas, Kailas started his tenure in the northeast following a Bachelors and Masters from MIT. While in graduate school, he and John McBean invented the technology, performed the initial clinical research and recruited the core team that would form Myomo. Kailas also created Xitome Design, a leading humanoid robotics company. The MDS robot Nexi built by Xitome, was named one of the top inventions of 2008 by TIME magazine. Kailas resides in Indian Harbor Beach, FL with his wife, and 2 daughters.

James is currently the Vice President and General Manager of Trinetics Group - a Melbourne, FL based contract manufacturer specializing in plastic welding and assembly services. You may have seen him as half of team Brogrammers on The Runner, distributed via Verizon's Go90 platform.

Adam Hoffmann is a recent transplant from Portland OR. He has worked in the digital marketing space for over a decade, serving as a UI/UX designer, program manager, strategist and design thinking facilitator. Throughout his career, he has participated in and led strategic initiatives for Fortune 500 companies, including Intel, Nike, Google, and GE, as well as a number of start-ups.

Ryan is passionate about helping companies make a more personal connection online with their customers and prospects. He is a regular contributor to Search Engine Land, the largest and most popular SEO news site on the web. His work has also been featured on the HubSpot Blog, Business2Community and by LinkedIn Marketing solutions.

Shane Close is a User Experience and User Interface Designer with two decades of success creating engaging interactive applications and digital media for agency, startup and Fortune 500 clients. Shane is passionate about solving problems through design and creating solutions that allow users to be more efficient and productive.

Andy Quintana is currently the Senior Vice President of Business Development for Accent Technologies. His primary focus is developing and executing a Channel Strategy. He has 14 years of experience at IBM starting out as a Chemical Engineer working his way into leadership and sales roles. He enjoys coaching and connecting others while mentoring several individuals on a one-on-one basis on aspects of career development and business development. He has a passion for helping and empowering others to succeed.

The Honorable Roger W. Baker was nominated by President Obama and confirmed by the Senate as Assistant Secretary and Chief Information Officer (CIO) for the U.S. Department of Veterans Affairs (VA) in May of 2009, serving until March, 2013. He is recognized for transforming the federal government’s second largest IT department, with 8,000 people and a $4 Billion annual budget, into a customer-driven, results-oriented organization.He also served as CIO for the U.S. Department of Commerce from 1998 to 2001. Baker, currently serving as a consultant, has worked extensively in the private sector for a variety of successful technology companies, most recently as Chief Strategy Officer for Agilex Technologies.

Jason has 20 years of experience in technology and product development. Although primarily focused on web application development throughout his career, he has also held positions of Product Manager, Solutions Architect and Director of Engineering. Jason has worked for small and large companies alike including 2 medical software startups and 1 e-commerce startup here in Melbourne. He has also worked as an engineer for Philips Healthcare and Florida Power and Light. Having managed product life cycles for small and large companies, Jason is well equipped to guide entrepreneurs down the right path to a successful outcome.

Anthony Eden is the founder of DNSimple, a 25-year software developer, and a seasoned international speaker. In addition to bootstrapping DNSimple, Anthony has been an early-stage member of numerous small businesses and startups since the late 90s. Anthony has a large portfolio of open source projects that he either created or contributed to, using multiple languages including Java, Python, Ruby, Clojure, Go, Erlang and Elixir. Anthony has spoken at conferences in both the US and Europe on topics such as software development techniques, best practices for systems design, and how to build a sustainable business. When he's not working you can find him surfing, snowboarding, playing board games, and traveling.

Dr. Jonathan Reed is a management consultant, educator, and former corporate executive. He is President of Strategy First, a local consulting firm that helps organizations with strategic planning and management processes. He is a Visiting Assistant Professor at Florida Tech’s Nathan M. Bisk College of Business. Previously, he was Vice President of Strategy and Business Development at Harris Corporation. Dr. Reed’s research interests are in the areas of strategic agility and strategic fit, highly relevant topics for today’s entrepreneurs and startups.

A New Jersey native, Bob relocated to the Space Coast from the Northeast in 2012 to lead the human resources and administration functions at Melbourne-based Harris Corporation. Newly retired, he is passionate about collaborative problem-solving, designing a company structure and building a team of the right people to move goals forward, and establishing an operating cadence with robust processes to drive success. Bob has participated in more than 100 merger and acquisition transactions of varying sizes over the course of his 30 years on the senior leadership teams of Fortune 500 businesses.

Bryan Stewart currently serves as the CEO for PracticeWise, LLC. PracticeWise is a mission-driven company that serves individuals and organizations working with children and families struggling with behavioral health challenges. Bryan has over two decades of leadership experience including nearly 7 years of service as a US Marine Corps infantry officer. He holds a Bachelor of Science degree from Ohio State and an MBA from Webster University. He is a straight-talker who is passionate about learning, growing, and helping individuals, teams, and organizations find and walk out their purpose. 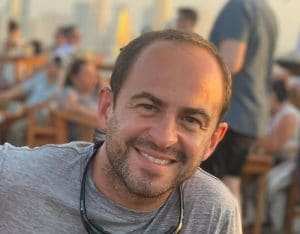 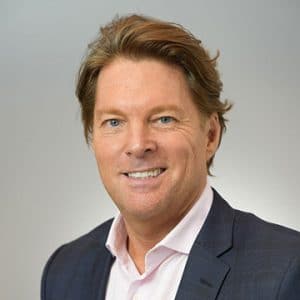 Charles "Chuck" Atkins is a Healthcare Executive, Investor, and Consultant. Chuck has more than 30 years in the Med Device Industry and has played an important role in helping launch 6 successful startups. He has helped build the Commercial Teams at several medical and dental robotics companies and has several successful exits under his belt including a $1.65 Billion acquisition of Mako Surgical by Stryker.

Chuck holds a Doctorate of Medicine in Dentistry (DMD) from the University of Alabama School of Dentistry and sits on the Board of Directors at Mision Vida Nueva, an Orphanage in Guatemala, and the President's Council at Gladstone Institutes in San Francisco, an independent, non-profit biomedical research organization. Chuck has most recently been advising a Groundswell startup, Kalogon, as they begin to commercially launch their transformative technology.

Get startup news straight to your inbox