Building your Brand: a Case Study with Michelle Burke and Bossibly

By fumiko shinkawa | March 29, 2019 | Comments Off on Building your Brand: a Case Study with Michelle Burke and Bossibly

Creating a brand is one of the first steps to marketing your company. Your brand is the first impression a potential customer (or investor) gets of your company and its services. For many, building a brand can be intimidating. The desire to get it perfect the first time often drives founders to seek out professionals, rather than trying to work it out on their own.

Michelle Burke, founder of Bossibly, was no exception. In her career as a motivational speaker, soft skills coach and personal development mentor, Michelle had worked to strengthen and grow existing brands, but she had never developed her own. In this post, Michelle shares her first experience building a brand from scratch as well as tips for others in the same boat — from who to hire, to knowing the right fit.

When Michelle originally began her coaching career, she branded her work under her own name. But when her coaching started to look like something she could turn into a product, it was time to build something a little more scalable. In seeking out some professional help to get it started, she hit a couple pitfalls: no one seemed to understand what it was she was trying to do. She couldn’t find anything that resonated with her the way her personal brand did.

Michelle’s first foray into branding was with a graphic designer she met through her network. When asked what the process would look like, the designer didn’t seem to have a straight answer. “We’ll just cap it at three hours and see what you can do,” Michelle told him. After one revision, she paid him for his time but sent a note that they just weren’t stylistically designed.

After that, Michelle pulled together a couple of drafts from artists on Fiver. She was getting closer to a fit, but things just weren’t coming together.

“At this point, I’m not in love with branding” Michelle told Courtney, another graphic designer she’d received a recommendation for, “I’m not really excited about it and I don’t want to spend time on it.”

According to Michelle, Courtney told her that branding is a process — she wasn’t going to name Michelle’s baby. And though Michelle had some doubts, she trusted that Courtney knew what she was doing.

“I was nervous — I didn’t want to keep spending good money after bad to not get where I needed to be,” Michelle said, but she liked that Courtney had a process and that they were going to be collaborating.

Before Courtney put a single line on paper, she and Michelle spent some time defining the brand. They created a ton of Pinterest boards, including quotes, images and ideas. She and Michelle spent some time dumping visuals into those folders. “I think it helped her understand what the brand should be: the feelings around it, the imagery. What resonates with me, as a person — so that was the first step,” Michelle said.

Once they had that, Michelle and Courtney started working on better defining the platform. They used questions like:

They used the answers to these questions to come up with words and images that really represented the brand. From those words, they created phrases, sometimes by taking those words and pushing them together until a list of potential brand names started to appear. “We’ve got this funnel,” Michelle said of the process, “and we’re just dumping all of this stuff into the funnel to see what’s coming out at the bottom.”

Michelle and Courtney did all of these exercises independent of each other. Michelle talked about the importance of that — ensuring that they weren’t polluting each others’ first impressions and thoughts.

Once they’d whittled that list of brand names down to something manageable, Michelle polled it with her target audience — millennial women. She said that was her favorite part, seeing what forty to fifty of her target audience thought of the names they’d come up. Bossibly naturally bubbled to the top. That market validation was immensely important to Michelle, and she said of the time, “I feel confident about the name — that it’s resonating with my target. I’m just loving the whole process as well.”

“The market testing for me was huge as a validation piece. I’m not just assuming it resonates — I think that was really, really cool.”

Coming up with the name took 6–8 weeks and that was all Michelle had paid Courtney to help her do. Michelle wasn’t sure she wanted to spend the money to continue when she wasn’t making money yet, but said that she knew it was important and was willing to invest in doing it right. “I was having such a good time with her that I decided, okay, let’s work on the logo — let’s work on the colors,” Michelle said.

With the logo, they did a lot of the same process. They created Pinterest boards full of color palettes, images and logos that they liked. And then they had a conversation about those picks. What they liked, what they didn’t — ultimately, they settled on simplicity. The logo should be something really simple.

“[The logo] said a lot of things to me. It said there is a process, there’s practice, there’s an evolution, there’s growth, you know, there’s so many options for explaining what that ‘B’ is doing,” Michelle said. The logo didn’t go out for survey, Michelle said she was already married to it. They went through a couple of other iterations of the logo to perfect it, but otherwise, the “B” stayed mostly the same.

Know your target market before you start branding.
Michelle recommended knowing who your target market is before you start any of this process. “If that’s loose and nebulous,” she said, “I would think that it would be more difficult to go through this process, because you’re all over the map.” After all, you can’t please everyone — so you might as well focus on pleasing your market.

Ask about the process (and be prepared to get involved).
Michelle said that if she had to do the process again, she would ask the potential pick about their process. “I know what process I like,” Michelle said, “I would want to know that they have one and that it’s collaborative. For me, the collaboration is huge.”

And while there are some people who don’t mind handing off the baby to be named, Michelle isn’t — and it might be better for you to know whether or not you are before you reach out to a professional.

Trust your gut.
Before you’ve spent a lot of money or ended up with a brand design that you’re not in love with, watch out for red flags that the relationship might not work out.

Michelle said that one of the biggest signs for her with her first attempt was that the graphic designer didn’t want to meet. “My gut told me that I didn’t want to do it in a vacuum,” Michelle said, “But I wouldn’t make the time.” If you don’t feel like you’re on the same page, you’re probably not — and it’s better addressed sooner than later.

Creating a brand from nothing is hard and what might be right for one stage of your business may not fit for the next. The best you can do, especially early on, is to find someone you trust and test with your market early and often, to ensure that you’re resonating with them first.

Looking for support for your startup? Visit us at swellstartups.com to see where we can help. Or, if you’re curious to see Michelle’s hard work in action — click here to find out more about Bossibly.

Over the past 20 years, Michelle has conducted hundreds of 1:1's and webinars on the topic of self and servant leadership, founded a company designed to make being the boss possible for young professionals and given workshops and seminars to share knowledge in this arena. I've been hired by Fortune 500 companies such as Verizon, Oracle, Harley Davidson and have been published as a topic expert in publications such as CIO Decisions and Florida Today. 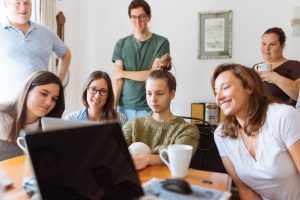